The low down on Bigneck

Bigneck, also known as Big Neck, is an unincorporated community in Keene Township, Adams County, Illinois. Bigneck or what is left of is located of just east of Loraine IL on Illinois Rte 61 and 7.7 miles west-northwest of Golden, IL. The community is served by Illinois Route 61. There remain about two houses in the community and no businesses. Bigneck once had a post office which is now defunct.

Big Neck was once a larger community than it is today. Little mention of Big Neck remains other than some historical references in some books on Illinois history and some geneology references such as these below.

The road sign on the village limit. Pay attention so you don’t miss it. 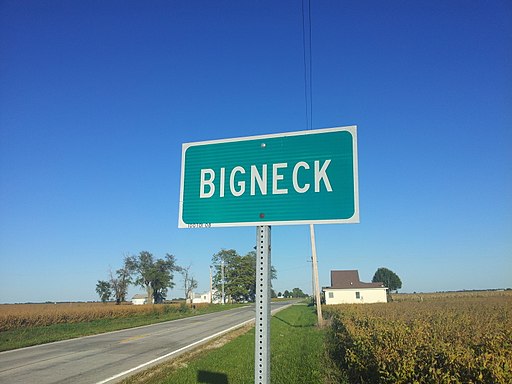 This township was first settled about the year 1834. Joel Benton, Thomas Hudson, Ralph Harden and John Caldwell were among the pioneers who commenced the culture of its soil and took advantage of the rich source of revenue furnished by the valuable timber, belts of which interspersed the fine prairies. This township is a valuable stock raising section, more especially because of the fact that it is so well watered. The principal streams are South Fork, Thurman creek, Middle Fork and Big Neck creek.

The first school house in the township was built of logs in 1843, on section 16. The first church organized was of the Methodist Episcopal denomination under the name of “Union Society,” in 1860. They erected a frame church building on section 24. The officers were Granville Bond, pastor; Samuel Curless, class leader and Ezekiel Walters, steward. The church was organized with fifteen members.

The village of Loraine was laid out in December, 1870, by Messrs. Woods and Lionberger, during the construction of the Carthage branch of the Chicago, Burlington & Quincy Railroad. James H. Wade, in 1870, built a store house and began a general merchandising business. In 1871 he was appointed postmaster. Christopher Seals, in the spring of 1871, built a store house and a dwelling, and did a general merchandising business, and also kept a hotel known as the ‘Traveler’s Rest.” S. P. Halton, in the summer of 1871, built a blacksmith shop and a dwelling. Other store houses, dwellings, shops, etc., followed soon. In the spring of 1872 George A. Yenter built a grain house and bought and shipped grain, as well as livestock. The first drug store was built by P. S. Cavilee in the spring of 1873. E. J. Selleck, in the summer of 1873, built a grist mill, which, before its completion, he sold to George Jackson and son. Rust & Barniber, in the spring of 1874, built a blacksmith shop. Drs. Coffield and Akins, in the spring of 1875, built a drug store and office and also practiced medicine, and in August of the same year Dr. Akins was appointed postmaster, and remained in office until January, 1878, after which James Coffield was appointed to the position, which he retained for some years.

All lines of trade incident to a railroad point in the midst of a thriving agricultural and stock raising region has been continued, and the village is in every way calculated to do and to maintain a good business. Woodville, a small place of about fifty inhabitants, is situated on the line of the railroad, in the extreme northern portion of the township. It was laid out in 1836.
Past and Present of the City of Quincy and Adams County, Illinois by William Collins. Chicago: S. J. Clarke Publishing Co., 1905, pp 328-329.

Call for a Quote or Inspection